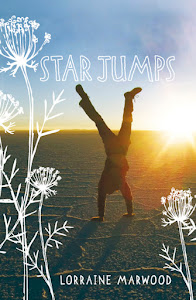 Star Jumps is a warm narrative verse-novel about a family’s life on the farm during harsh times. When Ruby, Connor and Keely invent games a Star Jump is always involved.

Marshmallow weed and calves. Tunnels and games. Hope and tears. Birth and death. These are all aspects of a farm life. A dairy farm life. Star Jumps is a book researched through years of living on a dairy farm. It’s a slice of social history. Farming as it is, not farming full of stereotypes.

My husband and I were dairy farmers for many years and although the book certainly springs out of closely lived details, the characters are fictional.

This novel just flowed, a rare event but I knew I wanted to write about drought and a dairy farm, to show part of Australia’s rural history as it really is- so much of this book is modeled in a way on our own children growing up on a dairy farm. With one difference- once I’d set Ruby on a quest, there was a solution she had to find, her own solution. And miraculously I used something I did as a child on my childhood farm to ease the drought in Ruby’s world.

Winner of the Prime Minister's Literary Awards for Children's Fiction, 2010

Notable mention in the Children’s Book Council of Australia Awards, 2010